1/ Trump and Sean Hannity often speak by phone several times a day, and the two speak most weeknights after Hannity's show on Fox News is over. Current and former White House officials say the conversations help Trump "decompress" at the end of the day since "he doesn't live with his wife." One former White House official called the talks with Hannity "a fucked-up feedback loop" that puts Trump "in a weird headspace." Hannity is one of a few dozen callers who have been cleared to use Trump's official White House phone line. (New York Magazine)

2/ The White House declined to apologize for Kelly Sadler's "joke" that John McCain's opinion "doesn't matter, because he's dying anyway." Instead, Sarah Huckabee Sanders said it was "selfish" for her staff to use the "inappropriate" comment as justification for leaking it to the press. "I am sure this conversation is going to leak, too. And that's just disgusting." (ABC News / New York Times / Axios)

3/ A Trump administration official proposed collecting and analyzing the communications of White House staff in order to identify leakers last year. Ezra Cohen-Watnick wanted to implement the "insider threat" detection program in order to find leakers or those disloyal to Trump. Cohen-Watnick worked as the senior director for intelligence on the National Security Council at the time. One current White House official said, "To cover my tracks [when leaking], I usually pay attention to other staffers' idioms and use that in my background quotes. That throws the scent off me." (Daily Beast / Axios)

4/ A former senior Trump campaign and transition aide is helping a Russian oligarch's company shed US sanctions. Bryan Lanza is lobbying on behalf of the chairman of EN+ Group, an energy and aluminum firm controlled by Oleg Deripaska, who was the target of US sanctions imposed last month. The company wants to reduce Deripaska's ownership in the company enough to be freed from US sanctions. (CNN)

5/ A Russian company indicted by Robert Mueller accused the special counsel of inventing a "make-believe crime" in order "to justify his own existence." Concord Management is challenging the legal basis of Mueller's charge that the company funded Moscow's effort to disrupt the 2016 U.S. presidential election. Concord is one of three Russian businesses and 13 Russian individuals indicted in February for funding for a Russian troll farm that directed a social media campaign aimed at sowing discord among Americans and at favoring Trump over Hillary Clinton. Concord is owned by Yevgeny Prigozhin, a wealthy businessman who is known as Putin's chef. (New York Times / Politico)

6/ Trump's first campaign manager, Corey Lewandowski, is going to work for Mike Pence's political action committee. Trump asked Lewandowski to join Pence's Great America Committee PAC, which is aimed at helping the Trump re-election effort as well as enhancing Pence's profile with both Republicans and Trump's base. Some Republicans, however, see Pence's moves as an attempt to take control over the party and separate Trump from his base. (NBC News / New York Times)

The Russia controversy forms the cloudy backdrop of Trump’s presidency, enraging the commander in chief. 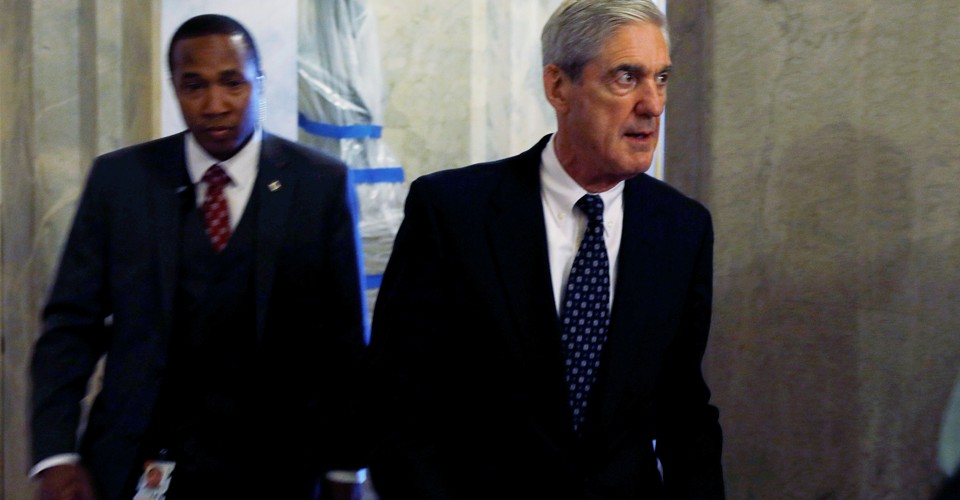 Mueller's Probe Is Even More Expansive Than It Seems

The special counsel’s team has interviewed a number of big names. But their interest in more obscure players tells a story, too.

Even amid a reported new push to protect the Mueller probe, there remains little appetite among Senate Republicans to safeguard the special counsel.